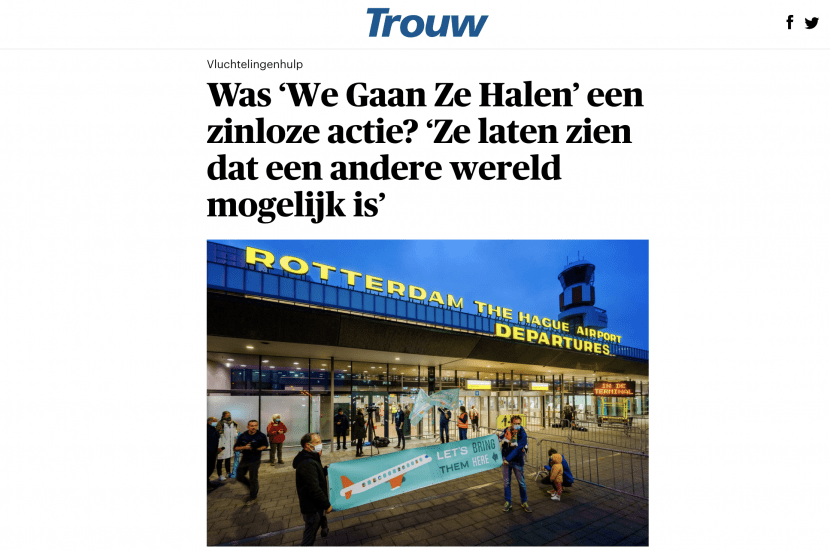 ‘Showing them that another world is possible’

The plane of activist group We Gaan Ze Halen returned to the Netherlands without refugees. Was their action actually effective, or ultimately useless?

Today, they are on Lesbos to talk to refugees and refugee organizations, but tomorrow the activists of the action group We Gaan Ze Halen will also return home. The return journey will be by a different plane than they had hoped: the goal of taking 189 refugees from Lesbos to the Netherlands with a crowdfunded plane was not achieved. Nothing has changed, and the 50,000 euros that the plane cost went up in smoke. Is an action like this really useful?

Tonight (Wednesday) there will be a closing event at the gay monument in The Hague. WGZH-frontman Rikko Voorberg and his colleagues will address the attendees via video link. That will not be about the effectiveness of the action, because according to Voorberg that is beyond dispute, he tells by phone.

“What we find pointless is that both the Greek and Dutch governments have had five years to deal with refugees in Greece in a more humane way, but have done nothing. We’ve seen how they smashed their hopes. We say: there is hope, and that’s why you see people moving again”. According to Voorberg, the organization has always been honest about the fact that the chance that 189 refugees would return was small. “We never claimed that we would succeed. We wanted to put relocation on the agenda, and we succeeded. In the Netherlands it was in all the newspapers, and it was also discussed in the Greek parliament.”

According to Oudejans, Arendts’s vision is related to the concept of ‘natality’, i.e. being born again. “By this she meant that every day we have the chance to make a new beginning, to create a fairer world. The meaning of We Gaan Ze Halen lies in the fact that they show that this other world is possible. They propose another narrative, namely that we want to be a society where refugees are welcome. This is in stark contrast to the current narrative of a restrictive migration policy.

Fighting for law and justice
According to Voorberg, it is mainly up to the people who supported the action to determine whether it was successful or not. “For me it is important what someone like Rabbi Soetendorp says, or what Samuel Lee, the theologian of the Netherlands, says”. Voorberg refers to the letter to State Secretary Ankie Broekers-Knol that was signed by a number of religious pastors. “They never said: we support this action because 189 people will be saved. They think it makes sense, period. They want to be part of a movement that fights for justice and justice”.