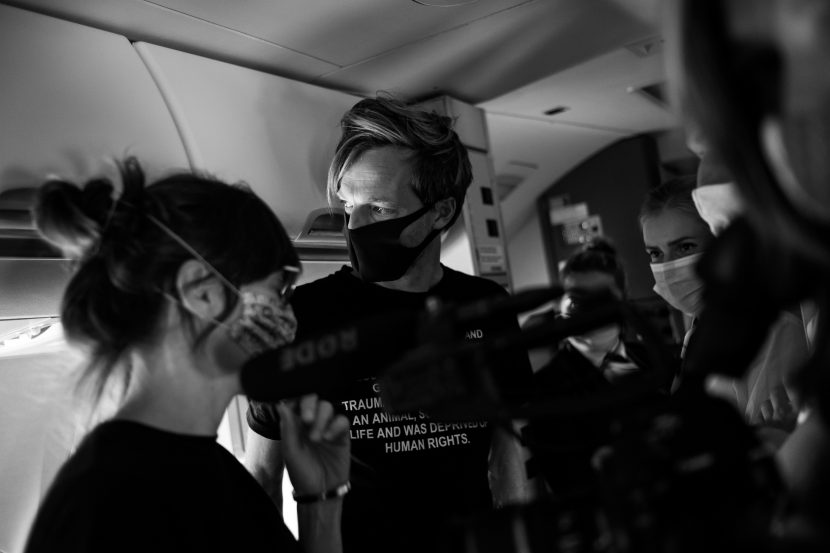 On October 5, 2020, Dutch citizens will send an empty plane to Lesbos airport. On board there’s room for 189 people from the former Moria camp. The goal is to convince the Dutch government to start relocating a decent number of people from the inhumane conditions that European politics has brought them into.

Permission to land on Lesbos, which was given beforehand, is withdrawn mid-air, just before landing. The plane is forced to land in Athens and then ordered to leave Greek airspace. Our team from We Gaan Ze Halen (Let’s Bring Them Here), that accompanies the plane, disembarks to avoid having to return to Rotterdam with the plane.

By bus and boat we travel on to Lesbos. We see the burned camp Moria, talk to aid workers, islanders and refugees. We see the new camp. And while it starts raining on Lesbos and the new camp immediately floods, we turn to Dutch citizens and politicians with the request for evacuation and relocation. The question that is burning in everyone’s heart in the new camp: when can I leave here?

Did the action fail, because we weren’t allowed to airlift refugees into safety? No, because the action already succeeded when the Dutch citizens decided to send that plane. It is appalling that the Dutch government refuses to pick up a reasonable number of people, either with our plane or with their own. “Don’t send us money,” said a representative of Greek local authorities on Lesbos, “take people away. Don’t try to buy it off, but live up to your humanitarian pretensions. Picking up a measly 100 people and then boasting about your compassion is a disgraceful display.”

Philosopher Nanda Oudejans said in Trouw about the plane of We Gaan Ze Halen: “According to Hannah Arendt the meaning of political action does not lie in calculating in advance whether your actions will be successful or will fail, rather: the meaning of political action lies in the action itself. That’s how you show what kind of world you would like to live in. The results of these kinds of actions are always unexpected, unpredictable and unforeseen. Think, for example, of the demonstrations against the Berlin Wall in the 1980s: the demonstrators never expected that the wall would fall so quickly”.

It could have happened. For whom did we do it? For those who are not heard. Whose cry for freedom from the Lesbos prison is answered with tear gas. With tents on dirty ground, blankets as a floor and one meal per person plus a little water, per day. We asked our friends from the new camp Moria if they were angry at us when the plane was grounded in Athens. “Of course not! We are angry with the Greek government, they should have let you fly!” They were happy that there were civilians who had heard their call and stubbornly sent a plane. It gave them hope, like every message that people may be allowed to leave the island again, fuels hope that this time it’s your turn. And that hope is your reason to live.

The hope that not everyone in Europe has forgotten what the Universal Declaration of Human Rights and the Convention relating to the Status of Refugees exist for. The hope that some Europeans are willing to act, turn their wallets around and open up their homes.

Is that hope justified for Dutch humanity? That is up to us. Again and again. That’s the reason behind the airplane, a wave-goodbye event, so much support, offer of shelter, a big Sent-A-Plane-Yourself-If-You-Won’t-Use-Ours event in The Hague that was organized within two days, a cargo bike with two airplane seats that drove all day Monday through Utrecht to ask for attention – and letters, lots and lots of letters to the government in The Hague.

“Every day we have the chance to make a new beginning, to create a fairer world. The meaning of We Gaan Ze Halen lies in the fact that they show that this other world is possible,” continued Nanda Oudejans in Trouw. “They propose another narrative, namely that we want to be a society where refugees are welcome. This is in stark contrast to the current narrative of a restrictive migration policy”.

So, should we return to providing pure emergency aid? No. Stichting Bootvluchteling (Boat Refugee Foundation), which offers very practical emergency aid, is struggling enormously with the question of whether they should. Whoever contributes to the camp is also responsible for its continuation of existence. It’s fantastic work what they do, We Gaan Ze Halen backers support them too, but they also face an impossible ethical dilemma. It’s these practical helpers who are crying out for relocation, because the current situation is untenable. Just like refugees and Greeks and Dutch citizens are crying out for evacuation and relocation. Government, how do you respond? We can neither remain silent nor give up.

Would we do it again? Absolutely. This plane didn’t get any further than Athens. Who knows what a next step will bring, whether it’s an action of We Gaan Ze Halen or something else. Nothing is solved there, politicians refuse to intervene for the time being. Giving up is not an option unless we want to bury our humanity.