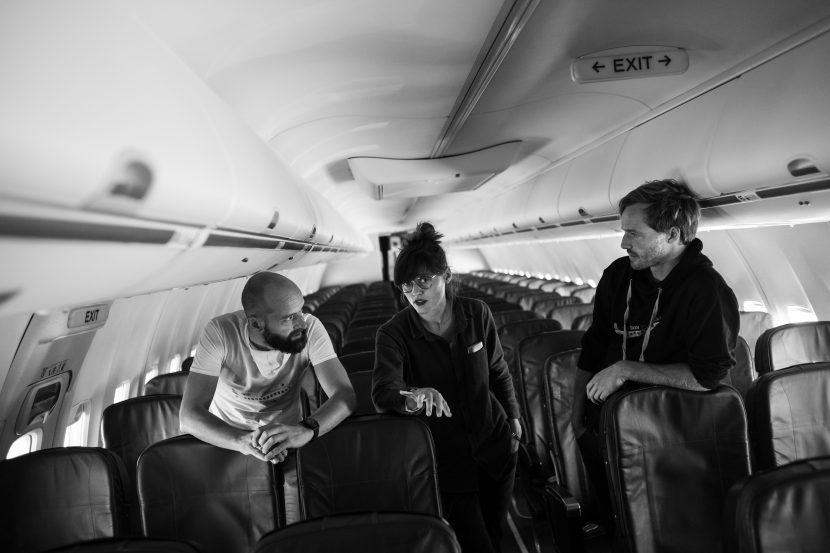 What was the purpose of your visit to Lesbos, Greece?
We came to the island to urge the Dutch Government to start relocating refugees. As citizens of the Netherlands we have raised awareness in all kinds of ways, with petitions, demonstrations, diplomacy and more. After the fire in camp Moria our government really hesitated to act. As citizens we couldn’t sit still nor be quiet and decided to show our government publicly how it is or can be done: sending an airplane to airlift people to the Netherlands. Since this didn’t please our government all too much they sent word to the Greek authorities, who in mid-air revoked the previously given permission to land.

If you knew in advance that you are not going to receive refugees without travel documents and without having previously reached an agreement with our country, why did you proceed with this action?  Was it a symbolic gesture?
There was quite some symbolism in our action, but it was not intended as a symbolic gesture alone at all. As Hannah Arendt, the famous philosopher says: political action is not justified by the results but by the action itself. A Dutch philosopher said about this initiative: one can never know with these types of actions what will happen. Protesters against the Berlin Wall were surprised how soon it came down. We are citizens who try to find ways to not oppose politics but to go ahead with what is clearly needed; inviting our governments to follow. We’ve done quite a bit of work to inform the government properly (see website: to Greek government parties and were closely in touch with George Papadreou who supported this initiative and the KINAL party. They knew that changes were so small, but the disruption of the current status quo, when it comes to relocation, is very important, they said. Of course we have organised this in contact with friends from the former Moria camp. Without their approval, we wouldn’t have launched this at all. We’ve drafted letters to people in the camp, telling about the intention of our actions and had them translated. Together we spread the translations as well as possible throughout the camp.

Do you think that a message was given to the Dutch Government?  What followed at the political level in your country?
The message is delivered for sure. That I can assure you. It’s been all over the news in every news channel in the Netherlands, it’s been raised in Parliament. We don’t see results yet- for you are just as we are- well aware that these government misconducts are not easy to turn. But we cannot give up, cause we cannot give up on the unrighteousness that is happening. The request of the Greek Prime Minister is clear: start relocating please. The answer of the Dutch Prime Minister is: we only have a support base for the relocation of a hundred people. That’s untrue, that’s what we challenge through very public displays. The message is delivered that emergency aid to Greece, nor money is going to help in the end. Politics is slow and will only turn with the combined effort of many people.

Europe is currently turning a blind eye to illegal deportations and at the same time Merkel is congratulating Erdogan.  In Greece we see that the political scene does not change even from such brave acts and that Europe has decided to turn the Greek islands into prisons and concentration camps.  The islander is so skeptical of such actions (as their own).  If the Member States assume their responsibilities and take some people to their country, will the problem be solved?  What will happen if the flows continue?
Of course this is a question of long term politics, people like Erik Marquardt (MEP) have a far better take on that situation than I do. After a conversation with him and a long conversation with a local representative of the municipality, we realised that Lesbos could definitely host a 1000 people, where procedures would be focussed at quickly deciding whether one was up for relocation to continue procedure in any of the other European Member States. The New Migration Pact proposes to change the eligibility criteria for asylum to 20% chance of asylum in Europe. Why should Greece have to do all the rejections? If they need to, the Netherlands can do them as well. We have to create a system that flows. The current system believes naively in this: we can make the situation for refugees so bad, that they won’t come. But you don’t want to be a worse place than Libya or other terrible countries people come from.

We are very skeptical about the fake humanitarian face of European countries. We are very worried by the fact that people in the camps have all reasons to believe that nobody hears them when they ask for relocation. We are very impressed by the work of some sound NGOs and cooperate on the other side of the message: these horrible camps shouldn’t have ever been here in the first place. Politics only change slowly – and never by itself. In history it’s always been active minorities that have changed entire systems. We cannot promise to bring change, but we can promise to fight for it.